You are here: Home1 / Issues2 / bart plantenga – The Man Who Came Home 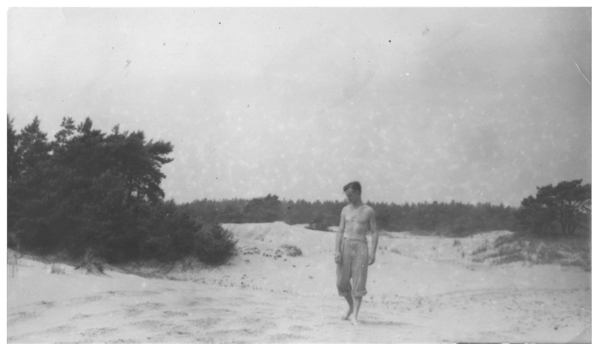 My father, Foppe Wijbren’s smudged-pencil, small-scribble wartime notepads contain certain details: number of Allied bombings, food purchased, ration reductions, books read, a girl’s address, things to do upon returning to Amsterdam. But nothing about his repatriation, nothing about the humid glow of my mom’s face, her eager burning eyes.

So, I began to research his last days in Berlin and imagine his eventual hike back to Amsterdam, a distance of 635 km. At a modest rate of 4 km per hour for 10 hours a day, he could have been back in Amsterdam in a little over two weeks, so why did he return only two months later? Did he find it difficult to say goodbye to his Berlin girlfriend?

Winter 1944-45: Berlin
Remember Silly Putty? That silicon polymer blob that could be torn, stretched, bounced, and—most importantly—lift ink images from a newspaper’s comics onto its pliant surface. And by stretching it you could reanimate Blondie comics, warping them to fantastical dimensions. Silly Putty amazed my father. I only learned why shortly before his death.

That winter was so bitterly cold that 10 hours in front of an open fire was hopeless to truly thaw your bones. His ragged, missing-buttons, wool coat, bought secondhand in the Waterlooplein, was helpless against the penetrating chill gnawing away at all hope and cognizance all day long, every day. He scavenged the streets, inside the ghostly remains of bombed-out buildings, hunting for insulation, old newspapers he could wrap around his body between undershirt and sweater before putting on his coat.

But by mid-afternoon his coat had absorbed the sun’s warmth and he was sweating. In the evening, while removing his clothes by candlelight, he noticed that the newsprint had transferred to his white undershirt. He could literally read the old news on his undershirt: ‘BERLINER ZEITUNG: Lieber 2000 panzer verloren die Sowiets in achttägigen kämpfe’ [Soviets lose roughly 2,000 tanks in eight-day battle] by holding it up to a shard of spared mirror.

When I was 14, he made me go out into the cold, in my pyjamas insulated with old newspapers. I remember that it worked. I remember how important the contrast between my cold face and warm belly was to him. I remember it was so still that we listened as the snowflakes alighted onto the earth.

Spring 1945: Middle of Germany
The first of my father-hiking-home-from-Berlin dream-reveries occurred when I was a teen. They coloured in what had gone untold, working like a movie scene, reshot over and over, with slight variations—a tattered jeep cap at a rakish angle, the kindness of women, ‘borrowed’ boots of a dead soldier discovered in an aromatic, bee-buzz, June field of clovers and poppies where he may have lain staring up at the mutating cauliflower clouds drifting by, dandelion wine brewed by a junge Frau living in an abandoned house outside Lachendorf [Laughtertown].

Winter 1961-62: Hawthorne, NJ
I didn’t think it odd getting up at 6 a.m., eating a hasty breakfast with my quiet father in the morning darkness, after a night of snow with unreal drifts up over my head, like a desert on the cold planet. Drifts that me and Kenny would later carve out into igloos dangerous enough to not tell our mothers about.

So very quiet was he that you knew he was rehearsing his broken English: ‘May we shovel your driveway?’ ‘Can we ask $3?’

We set out early, beating the young boys of 11 to offer our services. All was silent—no scraping snow shovels, no gleeful kids sliding down drifts, no spinning tyres, no police whistles directing traffic—only the distant grumble of the snow plow. By afternoon we had earned $25 [$216 in 2020 terms] on eight properties, including porch steps.

He gave me several dollars on the walk home, our shovels balanced on our shoulders, him always whistling the same tune at moments of human triumph over circumstance, proud of who he was, even if just for a minute. It was only much later that a musician friend identified it as ‘Whistle While You Work.’ My father pointed out the warmth that the body at work produces, along with that tingling glow of my rosy cheeks where pain and pleasure so wondrously mingle.

Spring 1963: Paterson, NJ
We usually picked up cheap, dodgy fruit and vegetables with darks spots you could cut away, a 50-lb. bag of potatoes for $2 at the end of market day. Returning home one day at dusk, we encountered a ferocious, legendary, pissing-down rainstorm that shall never be forgotten. Our grey, Rambler-Nash station wagon [1953] had a small engine that required building up momentum by jamming the accelerator to the floor—through the floor if possible—to climb that steep hill. Gunning it uphill, however, revealed a design flaw: as the car accelerated, the wipers would slow down; if you gave too much gas, the wipers would freeze altogether.

Young parents, anxious to shield their children from an unpleasant world, try to avoid these predicaments. My mother liked blaming intermediary forces—underhanded reality, a fate she’d never applied for, but mainly my father for buying an eight-year-old car with over 100,000 miles on it—and the seller, the weatherman, the roads, my father, the airline for depositing her in a hostile New Jersey, the war, my father’s employer, my father…yelling in Dutch, English, and other, unidentified languages. My father behind the wheel, silent, focused—forehead producing beads of sweat rolling down over the tip of his nose, face pressed to the windshield to allow him to see better through the murky rain—like the captain of a submarine, guiding us home just in time to watch The Dick Van Dyke Show.

Summer 1963: Sandy Hook, NJ
My father mostly sat in the shade offered by the beach umbrella, but he turned salmon pink like a good Frisian anyway. My mother, on the other hand, tanned very dark, claiming it was her gypsy blood. Probably not true because her family tree leads to early-18th-century Norway and not to where the Roma are from.

Although Sandy Hook [from the old Dutch Sant Hoek] is a 6-mile swath of crowded beach, my parents always let me roam the hot sand, observing other families, on my way to body surfing with lifeguards on duty, perched high in their tall white chairs. Waves met the shore at an angle, which meant in an hour I had been washed far down the shoreline by currents and undertow. There I lay gasping in the wet sand, not fully comprehending that I had been spit up just short of my last breath. I’d been spared and could suddenly view the world through strange new eyes.

When I stood up, I noticed the gentle saline breeze, the sweet suntan lotion aroma, the gleeful screams and transistor radios muffled as in a dream. I saw a million unfamiliar striped blankets, people in straw hats and snorkels, colourful coolers, air mattresses, and bright beach toys turning into Mondrian abstractions. I wandered and wandered for what seemed like an eternity.

A lifeguard eventually approached to lead me by the hand to the lifeguard stand. He handed me up to his partner who lifted me up on his shoulders, and blew his whistle while turning me—the eyes of everyone in the world suddenly fixed on me. Eventually I saw my father walking through hot sand in leather sandals to retrieve me. His gait was calm; his skin glowing pink. He didn’t yell, even managed a smile, a slight laugh perhaps acknowledging the absurdly thin line between losing me and finding me, between oblivion and the here and now. His laugh wiped away anxiety and fear as we trudged to the ice cream stand, where he bought me a creamsicle, standing there patiently in a patch of shade watching me enjoy it down to the stick. Although I never told him I almost drowned that day, he confessed in a few select words that he had almost drowned in the North Sea as a young teen.

Summer 1968: Blue Mountain Lake, NY
Blue skies, floating on a dinghy, watching a stick float by, dreaming with the sun at its highest, back when summers lasted forever. But, by nightfall, the winds had grown gusty, dramatically flipping and fluttering the tent flaps, sweeping plates and cups off the picnic table. A stormy night in the Adirondacks that my mother would mention for the rest of her life, with crackling bolts of lightning verily splitting the tall pines. Picture me counting ‘one one-thousand’—a lightning strike under a mile away. My mother anxiously preparing our passage from tent to Red Rambler station wagon [details of which years later became a William Carlos Williams-inspired poem]—because we’d learned from Popular Science that a car, grounded by rubber tyres, was the safest place during a thunderstorm.

so much disappeared
inside

beside the white cups
knocked over

Picture us scurrying in pyjamas, mother huddling over us with a blanket, quickly closing the car door, peering out the window to see the shadow puppet of my father in the tent aglow with gaslight, raising his dramatic fist, laughing defiantly at the sky, the lightning, death. My mother yelling at my father to get in the car until her false teeth slip and clatter in the side window reflection. Listen now to her weep over the tinny hiss of downpour, the muddy gurgle of the path turned to river.

Was he a testament to the resilience of the human spirit? I don’t know. Years later I remember my mother regularly retreating to our basement during thunderstorms. She’d remain there for hours in a panicked paralysis, gazing out the muddy basement window, until the storm had safely passed. Maybe the thunderstorms triggered traumatic memories of gunfire and bombs falling in Legmeerplein, Amsterdam, 1944.

Autumn 1987: Lancaster, PA Where is that photo of my father holding giant, harvested cukes in his outstretched hands? Or the one he didn’t know I took of him raking leaves, stooped over, blotting out memories, finding respite in the inconsequential, in garden work, in a swig from a clandestine bottle, the scent of fallen leaves decaying in the shade. This after having told me one too many war stories, stories he’d dare to return to only a dozen years later. AQ