Claudia Gary read poems from her new chapbook, Genetic Revisionism: Poems Inspired by the Sciences and Mathematics (Loudoun Scribe, 2019), and from others collections in various formats including a triolet ‘Monet’s Water Lilies’ (AQ15) and rhyming quatrains ‘Fixed Up’ (AQ16) and ‘Exurbia’ (AQ26). Hiram Larew read five poems, including one entitled ‘Achill Sound’, which is scheduled to appear in the 2019 Bridgewater International Poetry Festival Anthology and which he read as a way to introduce the anti-hunger poetry initiative, Poetry X Hunger, (poetryxhunger.com), launched with the support of the United Nations and the Maryland State Arts Council. Bryan R. Monte read a selection of poems from his unpublished collection On the Level: Fifty-five Poems about Living with Multiple Sclerosis. Irene Hoge Smith read from her unpublished piece The Good Poetic Mother: An Epistolary Quest, a series of letters to her mother, the poet FrancEYE. 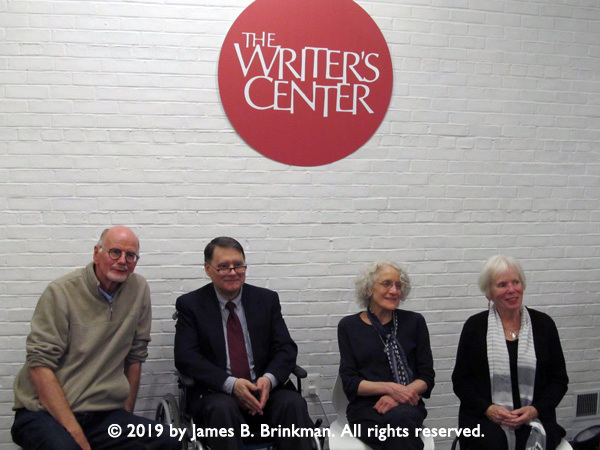