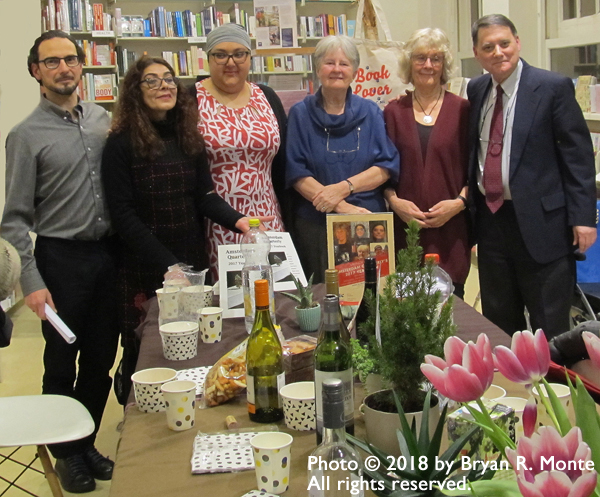 Danesh, in her AQ debut, read several moving pieces about her cancer diagnosis and her treatment’s side effects. Seman read an excerpt from one of her Ukranian memoirs that have received reader responses from as far away as Moose Jaw, Canada. Monte read five poems from his series On the Level, about living with multiple sclerosis.

The audience enjoyed not only the readers and their work, but also drinks and nibbles during the launch party, which was free and open to the public. In addition, Maria, from the ABC, demonstrated the Espresso Book Machine that has printed and bound all seven of AQ’s yearbooks, the last of which, the AQ 2017 Yearbook, in full colour.

Amsterdam Quarterly is an international online and print literary magazine, which was founded in 2011. Its mission is to publish, promote and comment on writing and art in Amsterdam, the Netherlands and the world. Notable past international contributors include Jacob M. Appel (US), Srinjay Chakravarti (India), Philip Gross (UK), Naomi Shihab Nye (US), David Sedaris (US/UK) and Joan Z. Shore (US/France), as well as local treasures Kate Foley and Philibert Schogt.

AQ publishes thrice yearly online in the spring, summer and autumn at www.amsterdamquarterly.nl and amsterdamquarterly.nl and annually as a print-on-demand compilation anthology or yearbook. Since 2011, AQ has published work in eleven genres: art, articles, drama, essays, fiction, interviews, memoirs, photo essays, photography, poetry and art and book reviews. AQ’s next issue, AQ21—Money, will be published on 21 March 2018. The deadline for this issue’s reading period is 31 January 2018. Other 2018 issues include AQ22—Texture, reading period April 2018 and AQ23—Genealogy, reading period July 2018. Please check AQ’s submissions page for more information.

AQ also has a writers’ group which meets on the third Sunday monthly (except for July and August) in Amsterdam. Admission to the group is through publication in AQ or by submitting a seven to ten page audition manuscript of work in your genre to the editor.