On Sunday, 17 October 2021, four members of Amsterdam Quarterly’s Writers’ Group raised a glass to celebrate their group’s 10th anniversary. Unfortunately, due to past Covid restrictions, the members hadn’t seen each other and discussed their work face to face since their last physical meeting in Amsterdam on 16 February 2020 before the Covid-19 restrictions went into effect.
Group members found a videoconference a refreshing change from the group’s previous practice of sending feedback to each other via email. Group member Simon Brod set up the meeting’s communication link and sent the invitations.
This writers’ group meeting discussed and/or critiqued five pieces: three poems, one memoir, and one essay. Sandhya Kirshnakumar sent a poem for consideration about a weather warning in Amsterdam, Bryan R. Monte, a poem about searching for relatives in Trento, Italy, and Simon Brod, an enigmatic poem about the creation of an idea or a child. Darya Danesh submitted a memoir about the accessibility barriers people with disabilities face at a public concert. A fifth member, bart plantenga, was unable to attend due to his return from Ameland the same day. However, the group sent him feedback on his essay on gun violence and popular music, and bart also sent the group members feedback on their work. Lastly, long-time writers’ group member, Pat Seman, a regular for the past eight years, was also unable to attend because she was on a return journey from Greece. She sent her best wishes and emailed she looked forward to rejoining the group in November via videoconference. 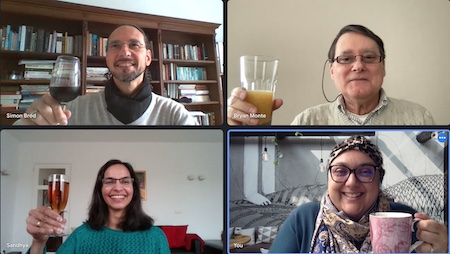