While spring cleaning this year, I came across a small canvas bag emblazoned with the words “Chirag Premium Rose Long Kernel Basmati Rice. Product of Pakistan.”

Perhaps others could discard this humble item, but I cannot. It is a memento of the sweet students I taught eight years ago, refugees from Bhutan, at a time when I was a stranger in a strange land of my own.

In early 2009, my husband found the perfect job in Houston, Texas. After a few years in Washington, D.C., I simply wanted to go home to Ohio, but that wasn’t meant to be.

Houston is a fine place for people who call it “home,” but for me, the “everything-is-bigger-in-Texas” mentality made me feel small, insignificant, alone. Everyone seemed to own a gun, and weapons scared me. The Texas drawl was annoying for this fast-talking Yankee. Texas politics were ultra-conservative to my liberal bent. The beef-centric cuisine did not appeal to this part-time vegan. This city was not for me, to say the very least.

While in D.C., I taught English as a Second Language, or ESL, to the spouses of wealthy expats. Many of my students had a little English background and were quite easy to teach. When our sessions were done, they presented me with expensive jewelry. I was uncomfortable accepting such items—I was just doing my job!—but a refusal would have offended the students. I learned to simply say “Thank you.”

Soon after arriving in Houston, I received my first assignment, a six-week class to be held in the old party room of a rundown, Houston apartment complex. I was going to work with Bhutanese refugees. It wasn’t exactly the luxurious suburban homes of D.C. expats, but it got me out of my house.

A case manager briefed me on my new students, explaining how they became homeless in this world, a sad old tale about hatred against one’s neighbor. On a less profound note, she added that their apartment furnishings were only second-hand card tables, folding chairs, mattresses, and pillows. Even pretty containers and bags from grocery goods became prized possessions.

Refugees brought to the United States have six months to get a job. They must learn English. They are provided housing, food, and the other essentials of life but are expected to be self-supporting quickly. And I wanted to help.

On my first day of class, lessons plans in hand, I waited for my students. Into that old party room they came, raven-haired women wearing the brightly-coloured saris and the red bindi of their Hindu culture. The men dressed as casually as any other Texan, clad in t-shirts and jeans. About a third were young married women, another third, their husbands, and the rest were elderly. The young students were definitely motivated to learn English not only to fulfil the language requirement but to help them converse with doctors, store clerks, and their children’s teachers.

Usually ESL teachers employ an immersive approach, not allowing anything but the target language in the classroom. This assumes that students are already literate in their own tongues, but I immediately discovered that half of the Bhutanese students couldn’t even use a pen.

Fortunately, an intense young man, Tashi, was able to assist me. He had taught beginning English to his compatriots in their Nepali refugee camps, and they trusted him. Tashi helped me demonstrate how to pick up pens and make letters and numbers. He also translated for the pre-literate students, but most of the time I came up with communication techniques. A smile is the same in every language, so I smiled at lot, even though it felt forced. I mimed verbs such as “walk” and “eat,” and the photos in our textbook illustrated many concepts. I repeated myself constantly until the students could replicate those basic sounds of English.

After a couple weeks, laughter and hesitant conversation filled that old party room, and my own smiles were no longer artificial but heartfelt. Through “my refugees,” I found purpose in Houston. I felt at home.

But it certainly wasn’t all happy. I soon learned that teaching English involves more than articulating phonemes. I learned to ignore textbook pages with photos of hamburgers, televisions, Christmas presents, or Hollywood actors—these topics were irrelevant to students whose culture was not at all Western. I sometimes jumped ahead to chapters explaining how to call for immediate medical, police, or fire response. I empathized with mothers who were preoccupied with worries about sick children. I applauded the efforts of the shy elderly students who could finally say “Nice to meet you” after four weeks.

On our last day of class, one of those young women starting crying. “You teach us no more,” she said sadly. The language school I worked for didn’t ask me to work another six-week session, tersely stating that these good people needed to find jobs immediately, fluent or not. That angered me, so before I left them, I connected the students with a local Hindu charity that I found.

And then it was time for me to walk away from the refugees who made me feel at home in Houston. As I was about to say a final farewell, Tashi and a couple young women approached my desk, the entire classroom breaking out in big smiles. He handed me a plastic grocery bag. “Our gift to you,” he said proudly. To thank you.” Inside was the canvas rice bag, folded carefully, the most precious gift I have ever received. Given to me with gratitude and love, I will always cherish it. AQ 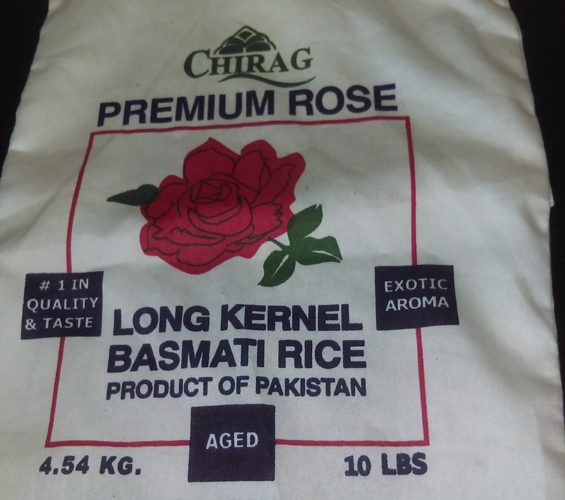