During the past reading period, three titles have come to my attention, which I feel are relevant to AQ10’s theme of the earth, ecology and the future. The first two are books of poetry with environmental and philosophical themes and the third is a book about digital design which contains the artist’s/author’s images from both the natural and man-made world.

The first book, Later, is by 2009 T.S. Poetry Prize winner and English nature poet, Philip Gross, who is featured in an in-depth interview in this issue. In Later Gross continues his poetic explorations into his father’s failing health and death (the first 34 pages of the book) within the context and the limits of land, water, sky and language. To say, however, that this first section is just devoted to his father, however, would be misleading. 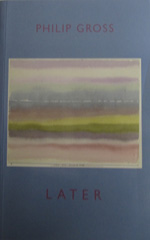 In fact there are also poems about natural landscapes, political change and language. In the first poem, “Flying Down Wales,” Gross describes Wales’ mountains as a“knobble-/back spine” and “surly wrinkles.” The next poem, “Home, 1990,” describes the effect that the end of communism and the lifting of the Iron Curtain had on refugees from Eastern Europe (and their families). “Come, you can come home now,” but instead the poem’s narrator looking into his father’s mind concludes: “Estonia was safe here, inside of you.” “Variations on the Theme from the Cornish” is as much a poem about language and culture as it is about Gross’ father’s decline.

To be sure there are poems almost exclusively devoted to Gross’ father’s illness such as “Stroke Ward,” “In High Care,” “Step,” “Survivor,” “Fall,” and especially “Birch his Book” which describes Gross’ father’s aphasia. Since some days I can type better than I can speak due to my MS, I think I understand a bit of Gross’ and his father’s frustration. Gross describes very well the situation where “few things and fewer each day answer to their names” and how he tries to teach his father the tree’s name, (a birch) as his father did for Gross when he was a child. The ambitious, eight-part poem entitled “Spoor,” (Dutch for train tracks or rails), mixes a journey to The Hague with his father’s physical decline and it relationship to his damaged neural network. I know very well the effect of the “blood shadow/ of stroke damage” and the “Scuff marks” in the brain that sometimes causes unexpected hesitations in my conversations due to my inability to find the right word or even substitute a simpler one. While I’m struggling, there’s also the added frustration of people finishing my sentences.

But as I mention in the beginning of this review, there is another side to Later, one in which I believe the poet, afer he has grieved, really begins to see the whole world again, especially its connectivity at the physical, social and metaphysical levels. In the book’s title poem, Gross uses the image of a bird that “stands up almost, on the water, up-and-un/ruffling wing of spray” as a metaphor for consciousness “…Yes, maybe that’s what self is, not/ a tight-inside-us nub/but what we are, thrown/out and off, un-self-seen,/ once-for-all,”. Gross moves forward in his poetic style in that he rediscovers his description of the social world which he explored in depth in his earlier collected volume, Changes of Address: Poems 1980-88. In Later, he links this social awareness with his ongoing concerns related to physics and metaphysics as can be seen in his poems “Barry Island, with Dante and Ducks” and “Goal.” As “Barry Island” concludes, the narrator is brought back from his expansive metaphysical meditations at the seaside “at the point of pure/ attention,/ the vanishing point,/ a kind of ever after” to the more local, temporal sights and smells of the place: “in the here and Thursday,/ with the smell of burgers,/ beach tar, spindrift pink/ of candyfloss, a bit/ of grace, a bit of luck.”

His next poem, “Goal,” uses the same method but in reverse. This time Gross starts with a pub crowd watching a football match: “goal! has lifted them clean off their bar stools/ and out of themselves/ their mouths wide, like one full-on/ gust of wind; there may be words / and somewhere, losers.” Two stanzas later, Gross compares this feeling of happiness with “launched/ like a toddler from a rough grip” and ends the poem in an expansive direction: “great laughter/like God’s….” The natural world, most especially the wetlands and seaside, remains the prominent setting for his poems, yet, I can’t help feeling personally that after he has worked through his father’s death, (perhaps the real Later of this book) Gross begins to notice and embrace the vibrant social world around him and integrate it within the big picture. Other favourites of mine in this collection are the literary “Glosa, Westron Wynde,” the technically-interesting, delicately-balanced, concrete poem “Whit” and the biographical poem, “Dirac, The Tower,” about the theoretical physicist, Paul Dirac.

It so satisfying to see a poet successfully address so many subjects simultaneously, and to do so by employing simple lines that seem to float effortlessly down the page. With this approach, Gross writes poetry with a great reach and accessibility without calling attention to the himself as observer, but rather to his subject matter. Lastly, I would like to mention that the beauty and simplicity of Later is also reinforced by its cover design: a very tasteful, blue-grey colour inset with Paul Klee’s painting, “North Sea, 1923,” à lá Turner with its horizontal bands of light pink, gray, green, purple, yellow and one of blue three quarters towards the top of the painting, suggestive of a coastline.

In contrast to the subtle beauty of Later’s cover, the cover of Scott T. Starbuck’s The Other History: or unreported and underreported issues, scenes, and events of the 19th, 20th and 21st centuries features a dead duck covered in spilt oil. Similarly, Starbuck’s environmentally-concerned poetry doesn’t pull any punches. It is political, yet doesn’t fall into the standard trap of being purely polemic and/or programmatic. 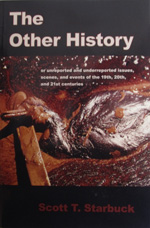 Starbuck reaches to find new images to discuss events in American history that many are ignorant of either because they have been suppressed or ignored such as the removal and/or extermination of indigenous American peoples, the pollution of their once bountiful, pristine land and, until the Obama presidency, climate change.

The book begins strongly with the poem: “The Other History or How Federal and California Politicians Killed Indians.” “A student in my class says her history professor doesn’t believe/ Ishi’s people were killed for 25 cents a scalp then five dollars a head.” In the poem Starbuck explains how the California state government and the cattle ranchers “pacified” the indigenous Americans in the 1850s, “whose descendants (now) fight poverty with casinos.”

Starbuck brings the personal and the political quickly together as in his short poem about the melting ice caps, entitled “How It Is.” The poem begins: “Sometimes you forget Greenland exists/ like two pages stuck together in a novel…. Then it melts and Holland disappears.”

One of the most imaginative poems in this chapbook is “What If One Night a Highly-charged Comet Went By?” in which he explores what would happen if humanity experienced a technological, historical and personal amnesia in which computers were wiped clean, big business was unknown, “Libraries were shelves of paperweights” and people began to explore the natural world again with a new consciousness. He proposes a Utopia where: “People rose at sunrise/and went to bed at moonrise./The wheel and the sewing needle/became essential.” resulting in a rebirth of humanity and human consciousness “without countless pressures, distractions, /clogged airways, and moving images in boxes.”

On a more personal level, the book’s penultimate poem, “River Reflections,” reveals a lot about Starbuck’s environmental philosophy and his belief in the extent to which he can change things. In just 47 words, Starbuck simply states: “Like the elk/my vote/won’t be heard. // I have little/ economic/or political power. // I’m uninterested / in matters / lacking soul. // I gave up / television / when I was 15. // I am a nonessential / and unproductive / worker// yet a threat / to the machine/ merely by resting // and thinking.”

This is good, environmental-activist poetry reminiscent of Allen Ginsberg’s anti-nuclear poems, but sharper and quicker to the point. The Other History is soul-stirring and pragmatic and could be used to educate students about human and environmental disasters/atrocities not usually covered in standard high school/second-form or college/university textbooks. It’s heartening to see that 19 of this slim collection’s 29 poems have appeared in 19 literary and/or artistic venues. That said, it’s a shame that none of The Other History’s poems have been published in more mainstream publications like The New Yorker or The Christian Science Monitor. As a result, Starbuck’s poems may never reach the audience they deserve and thus, also will be less effective in initiating real change.

Technology and the reach of humankind, however, are not always the source of destruction in the natural world. Yolanda V. Fundora’s Towards a Digital Aesthetic demonstrates how digital images can enhance the viewer’s appreciation of the beauty in both the man-made and natural worlds. Her book’s introduction begins with a history of her involvement with digital technology following every change in the ‘80s and ‘90s and hoping that someday low-cost technology (computers and printers) would catch up with more traditional techniques to produce lasting works of art. 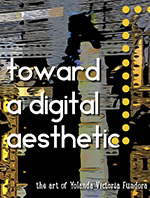 (I also experienced these technological changes in producing computer-generated books by typesetting my first magazine, No Apologies, in the mid- 1980s on the Brown University mainframe in CMS and saving it to reel to reel tape. Then in the 1990s, I designed books in GUI environments that produced bit-mapped type saved to 5 ¼ and 3 ½ inch “floppies” and CDs. And now  a generation later, I create multi-megabyte, word-processing and graphic application files for AQ’s websites and print-on-demand yearbooks that are saved to USB sticks and “the Cloud.”)

In the introduction to her book, Fundora also confesses that her love of art at a very young age caused her to ask adult strangers waiting in line at NYC’s MOMA or other museums if they could smuggle her in. (I too, share this experience with patrons of Cleveland’s main library, its Museum of Art and Severance Concert Hall.)

Her book, (which, like Starbuck’s, is available in both printed and digital formats) is divided into six parts: an introduction followed by her digital images grouped under the headings “Cityscapes,” “Landscapes & Trees,” “Abstraction & Symmetry,” “Musings and Ruminations” and “Noteworthly Floralities.” Four of her five paintings on display in this issue come from the first section. These include her bifurcated and partially denatured pictures of Amsterdam’s canals and her “Cleveland Park Fence,” and her “Rooftops of Amsterdam” with its Van Gogh style/Santa Fe colour sky and clouds. The fifth painting, “Waterfall Pilgrimage at Ohiopyle,” along with her other nature paintings in the second section, reminds me of Tiffany’s stained-glass windows, especially her “Dappled” and “Jockey Hollow” tree series drawn in broad brushstrokes and seemingly backlit. Just as interesting are pieces in other sections, the “Abstraction & Symmetry” section being my next favourite, especially the paintings entitled: “Organica” featuring what appears to be almost flower-like swirls of red, white, black and light blue, “The Birth of Galaxies” featuring swirls of colour sweeping out from a single point and “Magnificat” which looks like a combination of pastel and earth colour rock strata and crystal faces. Towards a Digital Aesthetic is truly a beautiful collection. It has inspired me to try my hand at creating digital art. I’ll begin with something simple like modifying some of my Amsterdam scene photos in Adobe Photoshop to create the sliders for  the AQ11 Autumn 2014 issue. I hope Fundora’s book also inspires you to take up your digital pen or brush to explore new techniques or styles to create your own visual art.